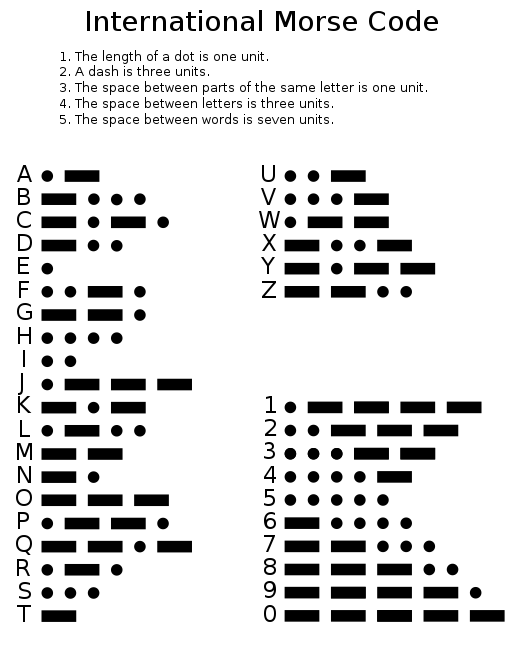 Morse Code (CW) is an operating mode (often referred to a "continuous wave" or CW) for the amateur radio service (also known as A1A radio emissions using the ITU type classification).  A continuous wave (CW) of constant amplitude and frequency is turned on an off.  Duration of the wave is used to denote a dash (-) or a dot (.).  Combinations of dashes, dots and periods of no wave can be assembled to represent a character.  Combinations of characters make up words.  And words make up messages.

This is called telegraphy.  The image above is of such a system known as an optical telegraph.  It was used in Napoleonic times for visual communications.  The modern day successors to this system include railway signaling systems, traffic lights etc.

In wireless communications systems this is called radiotelegraphy.  Pioneered by many famous engineers and inventors, it was really Guglielmo Marconi who brought about the use of radiotelegraphy as a commercially viable activity.   More importantly his work, and that of others, transformed the 20th Century.  Perhaps an even more significant evolution of radiotelegraphy was the quest for the harmonic telegraph - an attempt to use different tones and thus send multiple CW messages using the same wire.  This eventually led to the invention of the telephone by Alexander Graham Bell as well as Frequency Division Multiple Access (FDMA) - something in common use today with wireless networks and cellular telephones.  A simple 19th century technology at the root of modern day technologies...

Technologically one does not need much equipment to send out CW or to receive it.  The equipment is not sophisticated and can easily be built and maintained.  Power requirements are fairly low and bandwidth is narrow.  Because CW is modulated onto one tone, that tone can easily be picked out of the noise floor by the human ear.  While there are computer programs that can decipher CW, having a sophisticated computer defeats the elegance of the simplicity of CW (it is "cheating").

In the North, all of this makes CW a very relevant mode.  It is conducive to low power operations (QRP) and one can simply toss a CW transceiver, key and battery into one's backpack and set up an operational CW stations in the middle of nowhere.  With solar panels to recharge batteries, one has an amateur radio station deployed and capable of being operated indefinitely.

YARS is very interested in promoting CW.  For those of its members who have the Basic Qualification without an Honours Pass, getting a CW 5 WPM Qualification opens up the HF bands to them.  For Field Day, each CW contact is worth 2 points, while each voice contact is only 1 point.  There is a reason behind this difference in score value - and it has to do with emergency preparedness as well as well as skill.

More importantly, as revealed in contests, CW operators tend to invest in antennas and carefully listen for CW contacts.  We have found that if we can hear them, they can hear us.  This is not the case in SSB communications where many amateurs prefer blasting high power but their antenna set-up is poor as is their equipment and they are unable to hear the weaker stations.  Many a time we have replied to an SSB station only to receive silence from them.  This has never been the case with CW.

During contests we often operate in CW.  We usually get extra points.  It is possible to send and decode CW signals using a program such as fldigi,  but it is more challenging to do that manually and by ear.

We have 265 guests and no members online